OTTAWA, ON (October 3, 2022) – Following a great showing at the fifth Junior Grand Prix, which saw four Canadians finish in the top-10, a large Canadian contingent return to Gdansk, Poland for the sixth event of the series. A total of fifteen athletes will be competing at the event scheduled from October 5-8, including one woman, two men, three pair teams and three ice dance teams.

14-year-old Hetty Shi will be competing at her first Junior Grand Prix and will be the sole Canadian entry in the women’s category. Hetty previously competed at the 2022 Egna Spring Trophy in Italy and showed a lot of promise as she captured a silver medal in novice women.

This will also mark Edward Nicholas Vasii’s first Junior Grand Prix participation, after the Montréal native finished 5th in novice men at the 2022 Egna Spring Trophy last season. He will be joined by current Canadian champion Anthony Paradis, who bounced back from fourth to first in order to claim gold at the 2022 Canadian Tire National Skating Championships.

In the pair discipline, Canada will be sending three solid teams who have already competed in the series this year and have all stepped on the podium. Leading the team will be Chloe Panetta and Kieran Thrasher, who captured a bronze medal at the Ostrava Junior Grand Prix. The first-year junior pair teams comprised of Ava Kemp & Yohnatan Elizarov and Ashlyn Schmitz & Tristan Taylor will bolster the Canadian firepower, having won silver and bronze medals respectively at the Riga Junior Grand Prix.

Nadiia Bashynska and Peter Beaumont will be setting their sights on another podium finish after winning their first international gold medal last weekend at the fifth ISU Junior Grand Prix. They will be joined by Chaima Ben Khelifa & Everest Zhu and Jordyn Lewis & Noah McMillan who placed fifth and seventh respectively at their first ISU Junior Grand Prix of the season.

Competitions kick off on Thursday, October 6 with the women, men and pair short programs. Friday, October 7 will see pair and women complete their free program and ice dancers perform their rhythm dance. The event concludes on October 8 with the free dance and men’s free program. For more information and schedules, click here. 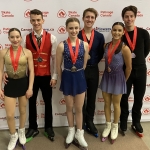